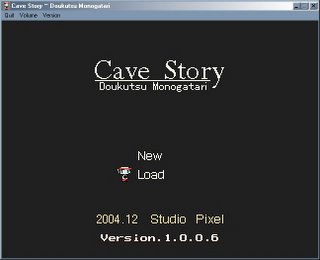 I heard about this game from a post on rpg.net.

So I checked out the link he gave me, which lead to the Aeon Genesis website. Aeon Genesis is a fan-translation group who had brought over a lot of quality Japanese games, mostly SNES RPGs which we non-Japanese folks would have no hope of playing otherwise.

This time, they translated a freeware Japanese game called Doukutsu Monogatari ("Cave Story"), released December 2004 by Studio Pixel. Such a simple name for a wonderful action adventure game. With gameplay akin to the current incarnations of Castlevania, you control a soldier girl who must explore the caves until she gets to the end. A bit simplistic but Cave Story actually has a "story" of sorts: there are NPCs sprinkled althroughout that advance the plot, as well as give helpful hints. You'd even come to love the villains you'll encounter.

And then there're the hero's different guns, ranging from the basic Polar Star to weirder ones like the Bubbler. Each of these guns can be powered up 3 levels by collecting crystals from destroyed monsters, with their effects growing with each levelup. However, if the hero takes any damage, the weapons also take damage, often resulting in them degrading. Powering them up doesn't take much effort fortunately, so it becomes only an issue during boss battles.

The gameplay is solid and the graphics are charming, especially when we consider the fact that this is a freeware game. Which kind of puts to shame those US/UK game companies who churn out crap games.

I played Cave Story using my Logitech Dual Action Gamepad, and the game automatically maps to the buttons, even to the point of using the Left Analog Stick for its directional control.

If you loved Castlevania: Symphony of the Night (inclusing the various GBA remixes) and Metroid, be sure to check this game out. Here are the download links again:

Doukutsu Monogatari -- LZH is a compressed archive format; I used WinRAR to unpack mine.
Cave Story English Translation Patch -- unzip this, run the patch, and tell it where you installed the game.