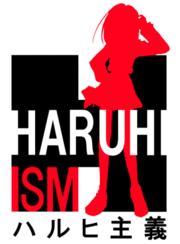 It's been almost a year since I first heard of and watched The Melancholy of Haruhi Suzumiya, it's a comedy/slice-of-life/highschool series that's unlike any other. Since then, I've been a fan of Haruhi, reading the light novels on my cel as they get translated into English (thank you, ReadManiac!). This afternoon, I got an urge to rewatch the entire series again (in chronological order). Damn, I really missed the S.O.S. Brigade, especially Yuki!

It's nice to hear that it's being released in English. I definitely must have a copy! I've heard somewhere that there's going to be a live-action movie. I don't know about that, but I wish they'd adapt the rest of the stories into anime.
Posted by dm_punks Posted at 10:58 PM