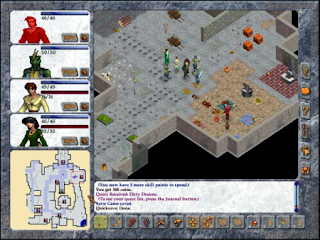 I've stayed away from the Avernum series since I failed to finish the first installment; finally burned out on the clunky interface and sub-par graphics, then lost interest. I'm a hardcore old-school CRPG fan, but maybe not that much.

Now, several years after, I've returned to Avernum, intending to playing through the fifth in the series. And what a pleasant surprise to see that while it still looks like the same engine, there has definitely been a lot of improvements, particularly in the ease-of-play department: a great tutorial and prologue, online help, streamlined GUI, and fun gameplay.

Avernum 5 definitely addressed most of the negative issues since the first game, opening up the old-school RPG style to a wider audience (i.e. me, hahah).