At long last, the circle is complete!

I've been hunting down the missing parts of my Fighting Fantasy Roleplaying Game collection for years, and it has only been last week that I've finally found the two books that have been missing: Out of the Pit and Titan: The Fighting Fantasy World. 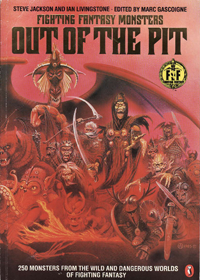 Out of the Pit is the Fighting Fantasy "Monster Manual," with stats for 250 monsters. This was actually released for the basic game but was later re-released as a sourcebook (in a largely unmodified form) for the Advanced Fighting Fantasy RPG. 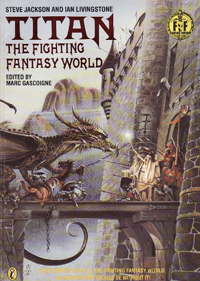 Titan: The Fighting Fantasy World details the campaign setting for the role-playing games. Not only can information on the popular continent Allansia (setting of most of the FF Gamebooks) be found, but those of other continents and places as well. Like Out of the Pit, Titan was also released during the same time as the Introductory role-playing rules, but was also subsumed as a valuable sourcebook for Advanced Fighting Fantasy.

I've played the heck out of what Fighting Fantasy gamebooks I could find at the local National Bookstore and Booksale branches way back in the late '80s to the early '90s. I remember Rebel Planet as the first Fighting Fantasy I've owned. I borrowed Deathtrap Dungeon and Seas of Blood from my friends. And later on was fortunate enough to stumble upon The Warlock of Firetop Mountain--the book that started it all--in one of my Booksale hunts. Since then, my collection has grown steadily; I have most of the 50+ books in the line already.

But it wasn't until a few years ago that I learned of an actual role-playing game based on the Fighting Fantasy gamebooks. Once I found out though, I lost no time in acquiring the first two books in the series: the first was simply titled Fighting Fantasy: The Introductory Role-Playing Game... 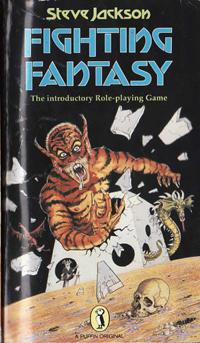 ... and the second was an adventure module with additional rules entitled The Riddling Reaver. 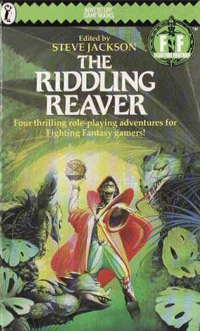 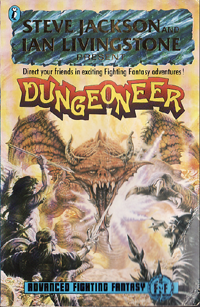 ... and continued with Blacksand! which expanded the rules in Dungeoneer (adding Priestly magic, among others) as well as laying down guidelines for city adventures... 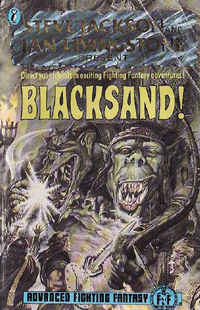 ... and finally, there's Allansia, which provides Fighting Fantasy adventurers the means to explore the wilderness of Titan. 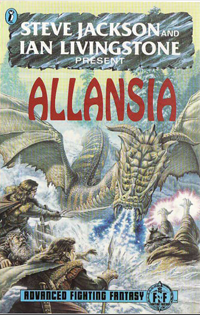 To Savage or Not To Savage?

Now that is the question. Do I convert the world of Fighting Fantasy to my favorite role-playing system, Savage Worlds or should I run it as is, with the Advanced Fighting Fantasy system. Both systems have their merits: Savage Worlds is fast, fun, and furious, and is certainly "old-school" enough to retain that FF feel. Running it using AFF would be a purer experience but the system, though light and old-school enough, has more than a handful of flaws.

Either way I decide, a new group of adventurers would soon be setting foot on Titan, to fight their way through their own fantasy.