Doctor Who: The Adventure Games - Episode 1: City of the Daleks

I'm a relative new comer to the Who-niverse, having just recently picked up the series with Season 5, which incidentally is also the start of the 11th Doctor's adventures (though I did later watch The End of Time two-part special that ended the 10th Doctor's life).

I regret being late to party for this one and hopefully still get to enjoy the previous Doctors' adventures. 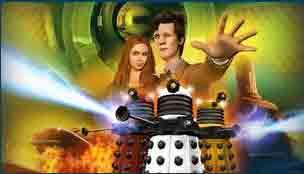 Along with the new season, BBC has also released episodic adventure games, starting with City of the Daleks and continued with Blood of the Cybermen,which went live for download just a few hours ago. There'll be four episodes total before they're through.

Tonight, I finally got to install my copy of the first episode, City of the Daleks. The game checks over the Internet to verify your location and will not allow you to install if you're located outside the UK. If, like me, that excludes you, you'll be happy to know that a good anonymous proxy server is your friend.

City of the Daleks is quite short, and I actually finished it in one sitting (about an hour, maybe two of gaming). Locations you'll explore include a shattered London Square and London Underground as well as Kaalaan, the planet of the Daleks. You'll be controlling the Doctor most of the time, with Amy Pond tagging right behind you. There's one sequence near the end where you'll switch to Amy. The whole experience was fun, and felt just like an actual TV episode of DW, from the prologue to the opening and ending credits.

If you're a Doctor Who fan who'd like to find out what it would be like to be the Doctor, you can't go wrong with this one. If you're not a Doctor Who fan, well, it's about time you come to the party.

I can't wait to play Blood of the Cybermen, but the proxy server I used to dupe the first episode's installer doesn't seem to be of much use over an extended period of time (the kind of extended period that a 330MB file download would require) so I'll wait a few days for a non-UK-only download link to become available.
Posted by dm_punks Posted at 10:15 PM