[Part 5 of my ongoing translation of "The World" chapters from the Meikyuu Kingdom GM's Book 2nd Edition. This one is all about Stars which play a big part in the every day life of the Endless Dungeons' inhabitants. This can be found on page 107. Original Japanese text is © Bouken] 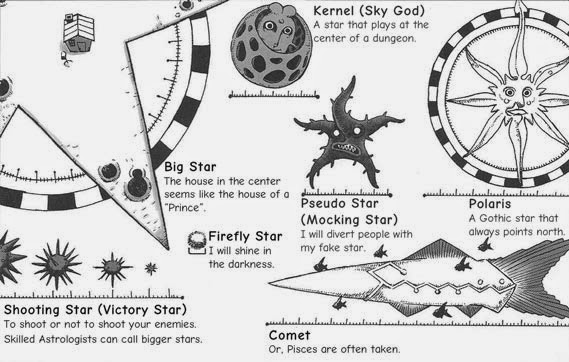 Before the Dungeon Hazard, the stars hung an unfathomable distance high up in the "Night Sky". This story is hard to believe, but evidence from various sources suggests it to be true. The expanding dungeon swallowed up the "Sky" and the stars which were all so far away are now near enough to touch.

There are many different kinds of stars. In common everyday life, people use Calendar Stars[1] whose light waxes and wanes over a constant period, Firefly Stars used as portable lights, and Polaris Stars which always point at a single direction. A Searchlight Star, casting a ray of light in one direction, is also useful. An white-hot Incandescent Star can boil water in a relatively short time while a moderately hot Infrared star can be carried as a portable body warmer. The dungeons are often very cold, so heat from these stars is very valuable. Such small stars are "harvested" like fruits from Star Fields near the kingdom. Generally, star hunting is a job assigned to under-aged children. Not only is this a good way for a kingdom to find good star handlers but the next generation's astrologists as well.

Astrologists are also good for using small~medium-sized stars. These have uses beyond being merely light and heat sources. Spiny Shooting Stars will surely hurt even thickest-skinned multi-headed Hydra. Other known attack stars include: Pulsars that fire straight or rippling beams, Multiples that track and mimic the Astrologist's attacks, and jet-black Collapsers that swallow everything.

A large star is an important resource for the industrial development of a kingdom. It is difficult to provide food without light shining down on farmlands. Before a blazing star can be installed in the ceiling of a kingdom, the star must be rolled through the Dungeons which might claim many lives due to traps, monsters, attacks by enemy kingdoms, thieves, or burning by the star itself. Star relocation is a major engineering endeavour important to the fate of a nation.

There are also special stars: Broom Stars which tunnels and saps the structure beneath dungeon walls, causing them to collapse, Omen Stars that are used in fortune-telling, and Pseudo Stars which are not really stars.

Broom Stars follow a fixed cyclical route for decades, much in the same way comets return over hundreds of years, and may raze an unlucky kingdom unaware that it was built along the star's route. Since it is impossible to make an accurate map of the Dungeons, it is likewise impossible to tell a broom star's path until it is very near. One of the astrologist's most important duties is predicting the course of broom stars by researching ancient maps and documents. An Omen Star is an ever-changing star whose form either foretells auspice or doom. But the omens are often vague, and could be interpreted many different ways. Pseudo stars, also known as Mocking Stars, are monstrous aberrations that mimic the form of stars to bait the careless land makers which they eat.

Some stars are of sufficient size to live in. Migratory fish live in stars made of water while flying creatures resembling kites or balloons live in a stars that are like gas planets. Dungeon Masters often remodel stars into some sort of living space. Cat-like "Star Princes", thought to be the larval form of some kind, can also sometimes be found living in stars.

Massive stars whose movement cannot be controlled by man's hand form a star system in the dungeons. The passage of orbiting stars creates can permanently create large corridors. Such spaces are not suitable for habitation because the stars will eventually return periodically as they complete their orbits, with nomadic hunter-gatherer monsters following in their wake.

[1]・・・・・・Calendar Stars are the basis for the Endless Dungeons' calendar systems. Even if seasons differ by area, it is confirmed that all calendar stars wax and wane at the same time. One period of waxing and waning is called a month. A calendar stars are also called Moon Stones, and are actually fragments of an ancient celestial body called the "Moon". This moon seems to have been made of cheese, and moon stones are likewise edible. A calendar star's period of waxing and waning corresponds to approximately 30 days, for no apparent reason.

There are four seasons on the calendars, but the climate in the dungeons does not follow them. It could be the height of summer in one kingdom, while its neigboring kingdom is caught in the grip of a raging winter snowstorm.

Day and night in the dungeons is distinguished by the brightness of the star. Starlight does not completely go off even at its dimmest, but the twinkling light would not be of use much as a light source. Generally, the period when the star is cheerfully bright is called "day" and the period when it is dark is "night". A pair consisting of a day and a night is called 1 day. ↩
Posted by dm_punks Posted at 8:13 PM