[Here's part 4 of my ongoing attempt to translate "The World", from the Meikyuu Kingdom GM's book. This particular piece about the Algorithm that transforms everything into dungeons, Kernels and Dungeon Masters is from page 106. Original Japanese text is © Bouken]
Dungeonization Algorithm 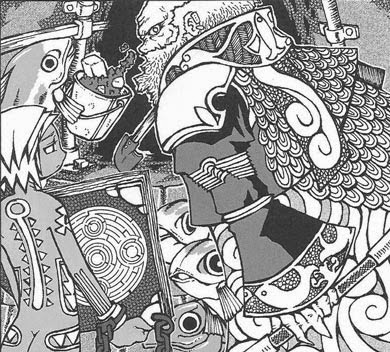 An introduction to Dungeonization involves talking about a lot of other processes. Walls and rooms can grow overnight and turn a great hall into a dungeon. There are also slow-growing dungeons that form several feet per year. A trap transforming the surrounding terrain is also a kind of Dungeonization. It is natural to assume that these various Dungeonizations are based on the Dungeon Hazard Algorithm.

The Zone of Influence of the Dungeonization Algorithm

The algorithm's area of effect is not limited to just the so-called "dungeon" consisting of corridors, doors, and rooms. The fingerprint of a person who has spent a long time in the vicinity of a kernel (discussed below) changes into more complicated shape. Altered fingerprints are relatively harmless, but Dungeonized blood vessels, nerves or other life-sustaining organs would cause serious harm. In fact, miners, speculators, adventurers--the kind of Dungeon scholars who leave the safety of civilization to delve into the mysterious depths of the dungeon--are generally short-lived, even if they survive the myriad dangers lurking in the Dungeon. Dungeonization of the body clearly exacts an extreme toll on a living creature's health[2]. Another theory is that this algorithm is also deeply involved with the rise in the appearance of wandering monsters. Genetics being still an esoteric lore, it is unknown whether Dungeonization affects the birth of life and heredity, but it does promote mutation.

Involving the birth and genetics, this is still an unknown area but Dungeonization seems to promote mutation. There are many more members and types within each monster race now than those found in ancient myths and legend. This theory cannot be easily dismissed as absurd.

By exploring the true nature of the dungeon algorithm, the Dungeonization may be stopped someday. Dreaming of that future, a Dungeon scholar sets foot into the Dungeon today.

In the Endless Dungeons, the Algorithm is run by a "Kernel"[3]. The kernel is the wide variety of items or creatures that facilitate Dungeonization. This entity can take a wide variety of forms, from small pieces of jewelry to a huge monster, with no consistency. Anything can become a kernel.

Things that have a high tendency to become a kernel include certain monsters like Minotaurs, expensive Artifacts that attracts people, and stars. In addition, some of the most powerful wizards and dragons dare to become kernel voluntarily, building their dungeons around themselves. How their bodies manage to survive harnessing the power of Dungeonization is a mystery. They can control the kernel power and build a dungeon through willpower alone as easily as they can control their own body. Thus, these "Dungeon Masters" are feared throughout the Dungeons. They aren't always evil and malevolent, but they are very territorial and often compete violently with one other.

An immortal king who rules the

A great wyrm sleeping in the

Employs a wide variety of monsters. His territory is so vast, he claims an entire Dungeon level as his own.

A madman who wanders the Endless Dungeons. Everywhere he goes is Dungeonized. He seems to have been a renowned wizard once....

Blue-furred man-eating Cave Lion. Highly intelligent and leads a host of beasts. Lurks within the hellish

[1]・・・・・・Basic dungeons can be drawn using a concentric circle, a pyramid, a spiral, and even the combination of geometric shapes such as the zigzag lightning pattern. These can all be expressed mathematically. You can think of the Dungeonization Algorithm as a magical representation of mathematics. ↩

[2]・・・・・・The effects of Dungeonization on the human body is also called Dungeon Disease. There are harmless changes, like altered fingerprint whorls or hair, but most cases of Dungeon Disease are fatal. In very rare cases, the changes to the body are beneficial. Like increased intelligence from a more wrinkly cortex or a second heart in a Dungeonized circulatory system. ↩