[This is part 3 of my ongoing series about translating those parts of the Meikyuu GM's book that deals with the world background for the Endless Dungeons (a.k.a. "One Million Labyrinths").

This one is from page 105 of the Meikyuu GM's book, which discusses the three layers of the world. Original Japanese text ©Bouken]

STRUCTURE OF THE THREE LAYERS 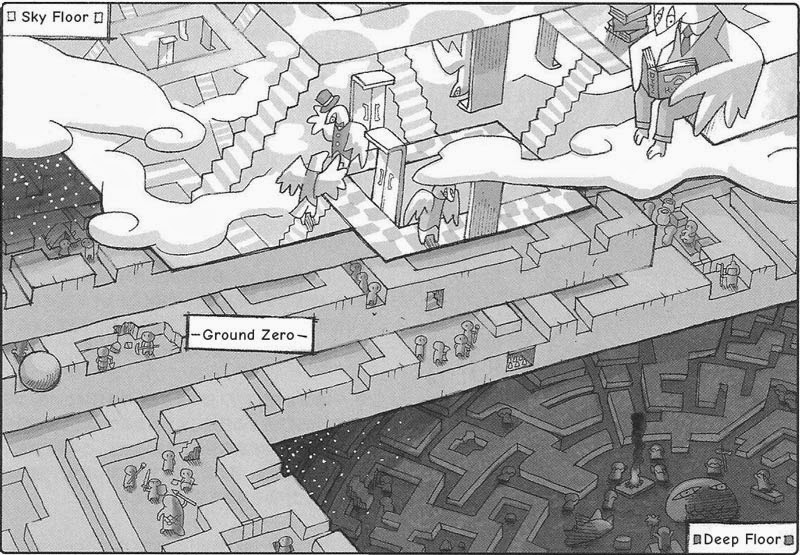 We live on the layer of the Endless Dungeon called "Ground Zero"[1]. However, the actual structure is composed of tens, maybe hundreds of actual floors. Ground Zero is made up of familiar elements. In other words, it is a passage, a door, a room, stairs, a trap, and a monster. When the terms "labyrinth" or "dungeon" are used, they are referring to this layer.

All Ground Zero isn't filled in with dungeons. There are relatively large spaces where people might live. Land Makers often start building their kingdom in such a place. It is not difficult to find an uninhabited area, but care must be taken. It may look empty now, but something may regularly visit it. A large room with geothermal heating[2] and stars might be the roost of a gigantic monster. It is a common story that some fledgling kingdom is annihilated by intruding into the lair of a furious Dragon or Behemoth. Care must be taken when an uninhabited large cavern is found.

Ground Zero continues horizontally forever and ever. There is a growing rumor that someone has seen the end of the labyrinth with their own two eyes, but this is mostly a tall tale told in taverns. As far as everyone knows, there are no exits from the Endless Dungeon.

・The Sky Floor and the Deep Floor

If going horizontally is no use, how about vertically? It gets a bit complicated. It's because, above and below Ground Zero, two different realms exist. Above Ground Zero is the "Sky Floor". The denizens of this upper floor are called "Highrise". Priests and sorcerers call them gods and angels. Beneath Ground Zero is the "Deep Floor" where the "Deep Ones" live. They are feared by most people and worshipped as devils and demons by those who practice witchcraft.

These spirit worlds are not a product of the imagination, they no doubt clearly exist. Trade and exchange of goods through an elevator with either the Heaven Floor or the Deep Floor is an important element of the economic activity of a small kingdom. Migratory fish and Elves, Jubjub Birds and many other creatures from the Heaven and Deep Floors wander around on Ground Zero.

However, this exchange is a one-way traffic. We can not enter either the Heaven Floor nor the Deep Floor from Ground Zero. Not that there is a physical barrier. Rather, the opposite. No clear boundary exists between Ground Zero and the Sky Floor or the Deep Floor. For the ongoing Dungeonification, a boundary as a concept does not make sense. If you wander the labyrinth and continue going up stairs, it stands to reason that you would reach the Sky Floor someday. The reverse is also true.

But, as you get close to either of these two realms, the danger in the Dungeon increases proportionately. Monsters are more ferocious, traps more brutal. There would not be anyone who can survive such a journey so far from his kingdom. Some people say that maybe an elevator can be used, but residents of the Sky Floor or the Deep Floor interpret anyone arriving via an elevator to be a sacrifice with no exception, and there is noone who have tested this method and returned.

The Highrise like the Deep Ones are alien to us. We do not even understand how they view us. These two races hate each other, and if they have both been put together in one place in the Endless Dungeons, war would soon engulf the place. Humans caught in the middle of a battle between the Sky's Mach Penguins and the Deeps' Gun Fish will definitely be wiped out. Ground Zero acts as a buffer zone sandwiched between the two mighty camps, where only weak races like humans live.

[SIDEBAR] The Legend of the Giant Race

Deep-rooted rumors of encounters with Giants, which should have been extinct, have been handed down through the generations. Coming into a huge passage while wandering the dungeons and fleeing in a hurry because they heard footsteps and voices like thunder coming from around the corner, or a large hall where the ceiling can not be seen and from the other side a huge foot can be seen coming past, or the ceiling of a room or corridor suddenly coming off and peeking into the gap was a huge face, and so on. There are also the fossils of giants discovered during dungeon excavations. Such bones are highly prized as building materials or as raw materials for medicine; they have about the same value as gold ore for miners.
[1]・・・・・・Elevation zero; also, the Dungeon Hazard's vertical epicenter.↩
[2]・・・・・・Or some hot springs, which further increases the risk of a previous occupant. Because monsters may want to revisit the hot springs, a Landmaker who builds a kingdom there might suffer from periodic attacks.↩