[Part 7 of my ongoing translation of "The World" chapters from the Meikyuu Kingdom GM's Book 2nd Edition. This one discusses the monsters and traps in the Endless Dungeons. This can be found on page 109. Original Japanese text is © Bouken]

The origins of monsters date back to before the Dungeon Hazard. Ancient documents often show names of such monsters as Griffons, Unicorns, Basilisks, Minotaurs, and Goblins. These ancient races of monsters can also be seen in the dungeons of today. Of all the races, the most ancient are the Dragons. They have always been Ground Zero's strongest race since ancient time and have continued to reign on top of the ecosystem of the Endless Dungeons. But even they can not completely resist the effects of the Dungeon Hazard. After the Dungeon Hazard, several varieties of false dragons appeared and spread like the Mushroom Dragons, Jabberwockies, and Dragon Modokis. True dragons can not bear the shame of these mock dragons' existence and kill them as soon as they are found.

On the other hand, more than a few species have disappeared after the Dungeon Hazard. One good example is the race of Giants. The giants once said that since their heads reached the heaven, they were a smarter race than humans. But since the Dungeon Hazard, records of the Giant race stopped. They probably would not have survives the dungeonification of the world because they were too big. You can see remnants of the Giant race in the bestial Ogres, the stupid Cave Giants and the travesty that are One-Eyed Giants.

Such deterioration and extinction, as well as increase in subspecies, seem to be a universal phenomenon of dungeonification. Some critics do point out that it is not the encounter with unknown monster that have previously been unrecorded that is a horrible thing, but the sudden individual changes that can happen within one's own body.

Well, it is easy to say that many monsters do bite. Flame genies that spread destruction in their rage, demons which embody malice, the wild saw boar that attacks people by instinct and the Bandersnatch which can be called the ancient enemy of humankind all with whom there's no possibility of a dialogue at all. Then there is Abaddon, the terrible monster that seeks to devour all creatures, whether they be Angel or Deep One. But not all races are bloodthirsty monsters. More than a few of the races have the intelligence to speak. You may also come upon a kingdom consisting only of monsters. With mutual compromises, you may be able to find a way to become the friend of such a kingdom. It is up to ruler to come up with a compromise when living with some mutant tribe in a remote region. Humans are overwhelmingly outnumbered in the Dungeon, and it is a foolish attempt and hard on the nation to fight all monsters surerounding one's kingdom. As an example of this kind of agreement, we know of a tributary relationship between a fairy nation and a Dungeon Master Dragon.

There are also those Monster species that have been domesticated by humans. Examples of these would be the Goldfish and the Horselizard. Goldfish are a kind of migratory fish used as a cargo work beast. Horselizards are reptiles that can either walk on two legs or on all four. They can move very quickly even in narrow dungeon passages and are often used as mounts by Knights. Depending on their type, they can move along the walls or ceiling and with a skilled rider can function as a Dragoon unit.

Also, monsters provide precious resources. Craftsmen, who anatomize a slain monster and process it as material for various foods and goods, are just as important as the national guard who protects the kingdom. Weapons can not be made without the monsters' nails and tusks, just as armor can not be made without their fur. Also, many monsters are also delicious to eat, despite their non-pleasing appearance. The earlier mentioned Goldfish and Horselizards are can also be eaten in an emergency. People may fear the man-eating monsters of the dungeon, but we kill, and always will continue to kill, those same monsters and eat them as food. 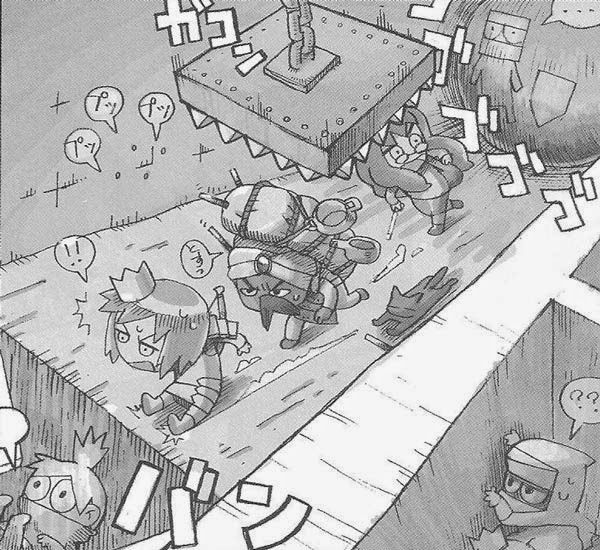 Traps are familiar to anyone who has explored the dungeon, but I wonder. Who here have experienced such indignation as minding your own business walking down an apparently worthless corridor and suddenly finding yourself caught in a trap? The Endless Dungeons have too many traps. Moreover, there does not seem to be any coherence as to their purpose or connection to the dungeon; most seem stand-alone.

Who on earth sets and maintains these traps, and why?

The way I see it, there are two kinds of trap. One is natural trap, the other is an intentional trap.

Intentional traps are easy to understand. There is something that someone wants to protect and the trap is installed in order to interfere with an intruder. Technical skills are necessary to set an intentional trap effectively, so it's common to employ a trap master for installation and maintenance.

On the other hand, there is a trap that is automatically generated along with the dungeon. This is the natural trap. Because this kind of trap is made regardless of what is lying around so sometimes it does not act as an actual trap. But they reset automatically after they are sprung without need for the time and effort of maintenance. When a natural trap can be used successfully, it is an effective defense against intruders. This is actually the worst threat for intruders because a strong Dungeon Master can generate natural traps at will.

Furthermore, traps can be classified according to purpose. Killing, Alarm, Stranding, Malicious Jokes... Special mention goes to the trap intended for capturing. These aren't just installed by Dungeon Masters to catch intruders. Hunters also use such traps to catch monsters. Nets for catching migratory birds and fishes can be said to be this kind of trap too.

In addition to these devices, there is also the tactics trap. The most often used is Ambush. Lure an enemy group, get them into a compromising position, sieze the opportunity, and strike quickly. Once thrown into the front, even a powerful group will have a hard time. The Ogre race like to use such tactics. Trap/monster combinations can be very brutal sometimes. Great Dungeon Masters know this fact well, of course, and devote time everyday to finding newer, more effective combinations.