[Part 9 of my ongoing translation of "The World" chapters from the Meikyuu Kingdom GM's Book 2nd Edition. This one covers the Deep Floor and its inhabitants, the Deep Ones. This can be found on page 111. Original Japanese text and art is © Bouken]

A Look at the Deep Floor 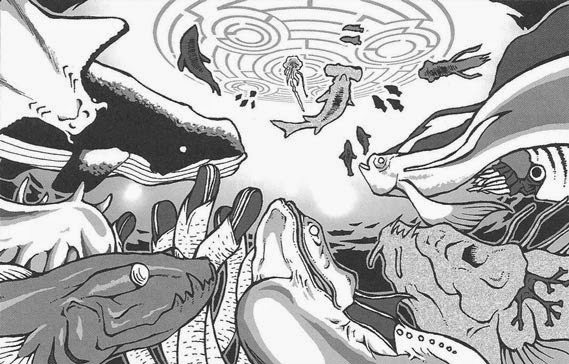 The Sky Floor corresponds to the former "sky" while the Deep Floor corresponds to the "sea". On the border between the Deep Floor and Ground Zero, there is dark waters that spread as far as you can see. Thanks to luminescent moss and noctiluca, the area is illuminated with hazy light. A stone dungeon entrance rises half-submerged in the still waters. A deep darkness swallows the ceiling above while below the boat teem schools of glowing blue and green fishes.

Various things fall from the deep darkness overhead. The water that circulated through out the Ground Zero becomes a great waterfall bringing things of all sizes daily, from garbage to corpses to collapsed dungeons. However, stars are the most interesting falling object. Stars that have burned out and disposed still give off their final blazes of brilliance as they fall to the Deep Floor through secret routes.[1]

Under the water's surface, the collected debris from collapsed dungeons offer a perfect hideout for fish. Diving deeper, the accumulated dungeons are being crushed by their own weight. Deep Floor fish that have not been seen before swim in the darkness of this high-pressure labyrinth.

Dungeonized coral forms a networked pattern of bright pink and orange in the sea. These and dungeonized snail shells are said to grow to tremendous sizes. These biological dungeons are re-purposed by Elves and other Deep Ones as fortresses. The giant snail dungeons can house a large army of Deep Ones and are often used as mobile fortresses for an expedition to the upper world.

The residents of the Deep Floor generally have the characteristics of aquatic organisms. They have physical structures that are suitable for swimming including fins, powerful tails, and screw/petal-like propulsion organs. While the Angels fly through their dungeons so do the Deep Ones swim through theirs. The commonly known species are the various types of passage fish. A lot migrate to Ground Zero in search of food so it is common to encounter a large school.

The Deep Ones mostly think the humans are an insignificant race. Their attitude is indifferent rather than arrogant, seeing humans as insignificant small fry. In fact, they emerge in Ground Zero like a natural disaster, suddenly appearing to claim a roost inside a kingdom or running amok in anger for no apparent reason. It is a hard time to draw their attention, and equally hard to negotiate with them (although you can certainly try). The medium to large sized Deep Ones are intelligent and understand the pros and cons of good "negotiation". Although they have a horrific appearance, they are able to collaborate with humans as seen with the Capitalistic Holy Empire of HAGLMA. However, as you dive deeper, their spirits  become more varied as well as their appearance. Mouths that can not even close because they are full of long tusks, complex light-emitting organs, an odd number of eyes rather than just two... Despite their varied appearance, these creatures of the abyss are highly powerful and can be very dangerous enemies. Small Deep Ones are like animals, just like small High Rises. This is quite obvious when you meet migratory fish.

Deep Ones also try to breed with humans. A common proposition when they approach a financially-challenged king is to ask for his daughter in return for whatever aid or business the Deep Ones provide.

The Elves are mysterious inhabitants of the Deep Floor. Some people,charmed by the mysterious beauty of their slender bodies that tinged with phosphorescent light, are dizzily lured away to vanish forever. The most well known are the true elves but many other subraces exist, like forest elves who live in forests of seaweed, brutal dark elves waiting for light sources, and the hair elf covered in downy hair.

The dwarves are a star-born Deep One race. They are believed to have evolved from moles, and every one of them is a born miner. Brown dwarves are the most common, and they can frequently be found trading with humans with a contract for a smithy or an excavation project. White dwarves are a subrace whose eyes have deterioted so they use huge pink light stars to search unlit unexplored dungeons. Black dwarves are a highly warlike subrace whose entire bodies are encased in iron. Red dwarves are an entire subrace seized with inexplicable madness and all of them are known to be fools.


[1]・・・・・・Stars that fall onto the water's surface from a great height shatters with a flash of light. It should be noted that when this happens, dungeons manifest as ripples on the surface of the water. Isn't this the same mechanism as the those dungeons created by the Kernel? We discussed how star seeds fell to Ground Zero in the section about the Sky Floor and now, with the information that stars can also be Kernels, comes a wacky hypothesis. Seed stars, kernel stars, and the Deep Floor stars falling into the water: are all of these the same? Since seed stars grow up to promote life in the dungeon, are kernels just stars that failed to grow up? The author does not know whether this hypothesis is worth asking. Even if the cause of the Dungeon Hazard comes from outside the worlds, this would not change the situation. But when studying the mechanics of the Dungeonization process, this writer's conviction that knowledge about the stars are indispensable grows by the day. ↩
Posted by dm_punks Posted at 7:06 PM