[Part 8 of my ongoing translation of "The World" chapters from the Meikyuu Kingdom GM's Book 2nd Edition. This one covers the Sky Floor and its inhabitants, the Highrise/Angels. This can be found on page 110. Original Japanese text and art is © Bouken]


The following two pages were taken from the writings of a scholar of the Millenium Dynasty, Argorob Tanbaborg, who mostly wrote travelogues but claimed to have traveled to the Heaven and the Deep Floors. Although there his work has received much criticism, it remains the most reliable source we can find for the moment.

A View of the Sky Floor 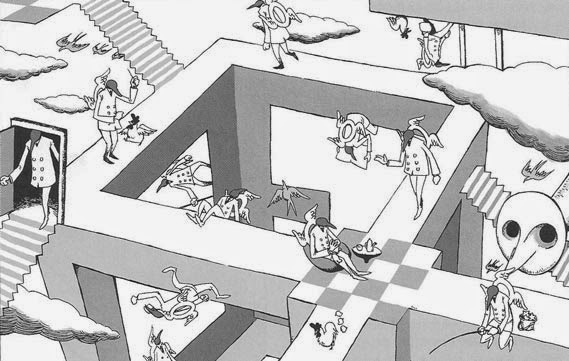 The Sky Floor is mainly composed of a "blue sky" that stretches as far as the eye can see. This was once the "Sky" above Ground Zero, lost from the previous world. Dungeons built on the Sky Floor take on aspects completely different from the normal labyrinths found on Ground Zero.

Sky Floor dungeons are a mysterious combination of passages, squares, stairs and myriads of doors, all ignoring gravity. White "Clouds" float about unrealistically interlaced with long stairs, and residents of the Sky Floor walk about passages and rooms with neither ceiling nor walls. Because there are no walls, doors may seem kind of pointless. But when I opened the door, it would seem as if you have dug through space itself, and a room and hallway can be seen beyond the door. Apparently, the main city of the Angels can be found behind one of these doors, but I have yet to discover where it is.

Towers dot the landscape. They vary in appearance from low to tall, simply straight or bulging with brances and offshoots. Some towers are connected together via bridges that form a grand arch between them.

Huge creatures such as Roc Birds and Thunderbirds dance leisurely up above. Flocks of these birds build their nests everywhere, screeching as they defend their territory.

This quirky labyrinth spreads infinitely in all directions, except below towards Ground Zero. Occasionaly, from far up in the sky, small brilliantly-shining things rain down to Ground Zero. The angel acting as Master Agorap's guide called these Star "Seeds". If that is true, stars fall down to Ground Zero from somewhere high above the Sky Floor and grow into the shapes we are familiar with. We will discuss this once more in the section on the Deep Floor.

The residents of the Heaven Floor have wings, feather, and various parts integrated into their anatomy that are common features of flying creatures. They can "fly" through the dungeon itself as if it were air. That is, they can slip through the walls and floors of the dungeon at will[1]. With this ability, angels can even make a one-way trip to Ground Zero.

The attitude of angels towards us is downright haughty and imperious, to say the least. Their motives are very difficult to determine, let alone understand. They might appear in a small kingdom with a sudden unreasonable demand (such as, immediate back rent for using the stars of the kingdom) with their arrogant and self-centered behavior knowing no bounds. They might also demand that humans wage a holy war on the Deep Floor, which would be a deadly undertaking (although some priests will thank them for the glory). But they are not all the same. The larger the angel's size is compared to a human's, the more arrogant it is; the smaller angels are generally more cheerful and friendlier. These smaller ones can be tamed and kept as pets. In fact, the smaller ones can be treated just like normal animals.

Angels occasionally settle down in Ground Zero, making a nest and raising a family quietly in a corner of the dungeon. It is understood that they are hatched from eggs. Although angel eggs sell at a very high price, enraged parents relentlessly chase down egg thieves, so no one in their right minds trades eggs openly. Surprisingly, angels often attempt to mate with humans. Supporting this story is the fact that angels sometimes demand healthy men and women as tributes. I shudder to think of the horrible fates that have befallen those who were taken away.

[SIDEBAR] Funeral Rites in the Dungeon

In general, burial rites involve the priests putting the deceased in an Elevator. While those in attendance pray, the elevator moves at high speed towards either the Sky Floor or the Deep Floor, and then returns. When the Elevator arrives, the doors open with a ding sound, revealing food inside. The food is shared among those who attended and the funeral ends with a banquet in honor of the deceased.

[1]・・・・・・When they touch a dungeon wall, their bodies get assimilated into the wall. The reverse happens when they emerge on the opposite side, where they transform from a dungeon pattern to their original shape. Since this series of processes is performed instantaneously, they look like the angel is just passing through the walls. This is a very exhausting process for them and the larger species cannot carry anything with them, so they often just use an elevator. ↩
Posted by dm_punks Posted at 6:46 AM