[Part 13 of my ongoing translation of "The World" chapters from the Meikyuu Kingdom GM's Book 2nd Edition. This post covers daily life, discussing food and transportation in the kingdom. This can be found on page 115. Original Japanese text and art is © Bouken] 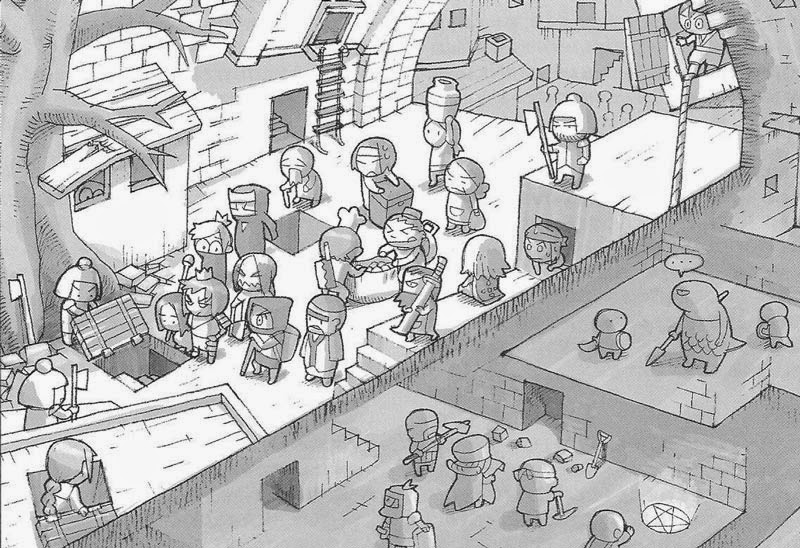 The Endless Dungeon's biggest problem is the lack of natural resources. It just isn't easy to forage for food in a dungeon made out of stone. Many died of hunger during the period of darkness following the Dungeon Hazard. Since then, man has worked hard looking for ways of producing self-sufficient food sources through trial and error. People are able to eat regularly today thanks to the accumulated knowledge and technology of those who have come before.

Great halls or huge caverns are usually found in the Dungeon. Such places are first reserved as possible farmland. Having a star installed in the great hall is the minimum condition for growing crops. Residential spaces can then be built in small rooms or even narrow passages nearby. Kingdoms that build their royal palaces or market squares in a great hall should have a plan for where to grow their food.

The only crops that can be produced in a poor kingdom that does not have any great halls for farmland are mushrooms and dungeon bean sprouts (the beans can yield even in poor light). Wheat bread is considered a feast, and it is even believed to cure disease if place by a sick person's pillow.

Schools of migratory fish and flocks of birds that swim and fly through the dungeons are another good source of food. These can be captured in large quantities by using net traps, and are usually either preserved with salt or smoked.

In small communities, cooking parts of monsters that have been slain in the dungeons are common delicacies. Some species are even prized as rare and delicious luxury delicacies. Some kingdoms even specialize in producing monster food as their primary source of income.

Elevators are also important sources of food for a kingdom. If you're trading with angels, you can easily get chickens; if with deep ones, you would get lots of fish. Be warned about the wildly varying prices. Sometimes, the only trade they will accept in return are human babies.

Sheep are the best livestock: they can be eaten and also provide raw materials for making clothes. They are absolute necessities. The Endless Dungeons' sheep are omnivorous creatures that eat moss off the walls and also prey on small animals. Shepherds are treasure to a poor small kingdom with no space for farmland. The sheep wander off into the dungeons at noon to eat and return in the evening. Small kingdoms that raise sheep will soon be crawling with them. It is common to have more sheep than there are people. One of the more important duties of knights is protecting the shepherds and their flocks. Cows are generally only used for farming.

Long ago, there were apparently animals called horses that were good at running, but they were not suited to the dungeon life and eventually became extinct. Tamed goldfishes and horselizards are widely used as riding mounts and pack animals nowadays. Goldfish swim in the air so they have no trouble with movement and horselizards' sticky footpads enable them to dexterously traverse difficult terrain. Caravans load baggage on the back of these creatures, moving from city to city.

The rivers and waterfalls that flow throughout the dungeon also has many uses. Because of the sudden changes in elevation, basket-type boats which hard to capsize are used. These are very light, made of hide stretched over a wooden frame, and can be folded when not in use for easy carrying. Another important issue is ensuring water supply. A small population might be able to survive by collecting water condensation on walls but it is not possible to feed people with that method. Drilling canals to channel water to fields and residential areas takes some serious work. When I first founded my kingdom, I had to make do with fetching water and filling in a water tank for a while. Human and cattle excrement are carefully used as fertilizer. Pigs and Giant Earthworms can be kept to process organic waste.

With stone all around us, there is no shortage of materials for constructing buildings. However, there is seldom any reason to make an entire building from scratch when you can just renovate the Dungeonized room into your house.

Wood is cut down from Dungeonized forests. Woodcutting is actually hard work involving considerable risk because dangerous monsters often haunt the forests. Because of this, this job is often relegated to scoundrels and similar delinquents.

Kingdom management becomes relatively easy upon finding a vein of metal ore. Much more so if said ore is precious metal. However, a lot of complications can arise during mining, from triggering sudden Dungeonization to unearthing sleeping monsters. It is common practice for kingdoms to outsource this job to dwarves because of their expertise.
[SIDEBAR] A Strange Form of Government

The nations across the Endless Dungeons are all basically monarchy, save for one which is based on a strange ideology.

This Bureaucratic System is mostly composed of court ministers. Kings do not reign indefinitely but change according to the results of elections. Sometimes, the priests of the angels or the deep ones or some other religion even have more power than the king...

Socialist states without distinction between Land Makers and commoners are notorious for the disease known as "revolution". Kingdoms that suffer from revolution are vulnerable and Haglma is eager to speed their collapse.

Because of their collective nature, socialist kingdoms also become the unwitting minions of Abaddon, Lord of Ants.