[Part 6 of my ongoing translation of "The World" chapters from the Meikyuu Kingdom GM's Book 2nd Edition. This one is all about the different types of dungeons comprising the Endless Dungeons. This can be found on page 108. Original Japanese text is © Bouken]
Types of Dungeons 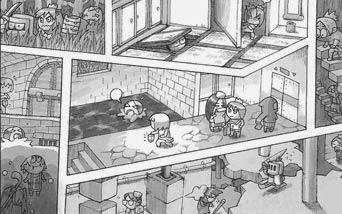 However, in addition to this "basic" dungeon, other types of dungeon landscapes exist. The Endless Dungeons are never uniform in appearance. Terrain and the elements vary depending from place to place.

Plant life are lush in areas with strong star light. There's dense undergrowth is dense and extends high to compete. Sometimes plants grow so huge, their roots and branches can be found on multiple dungeon levels. These roots and branches break through stone, causing a massive collapse in the dungeons. At this stage, the plant itself is usually already Dungeonized.

There are also submerged areas in the dungeon. Water level varies from being knee-deep to a flood that reaches the ceiling, but both are dangerous. Cold water saps physical strength, filthy stagnant water is a breeding ground for disease and pests. In high water levels, there might be small air pockets near the ceiling but you could end up swimming endlessly trying to look for the hidden exit or get caught by a strong current and dumped somewhere else. There are often water monsters from the Deep Floor waiting to prey on people splashing about. On the other hand, a submerged area with continuous water flow has the potential to become a valuable fishing spot. Near the Deep Floor, submerged areas become much more common and it not unusual to find hundred year old sunken ruins that have not yet been explored. Those who dive for ancient treasure in such areas run the risk of joining the countless bones at the bottom of the water, where even starlight can not reach.

Some areas are mechanical, with working pistons and moving gears. Steam often impairs visibility, and there are often elaborate traps in these places just as they are filled with resounding metallic noise. Noone has yet discovered whether these continually-growing machine areas are the effect of Dungeonization nor what purpose the moving parts serve.

Furthermore, the dungeon does not necessarily only extend horizontally. Sloping passages and steps can be found everywhere, and there is also a dungeon that primarily extends vertically through several levels. These dungeons often grow around the remnants of unused elevators. There is a frightening risk of slipping while climbing up a narrow staircase around the walls of a bottomless shaft.

Also stay away from abandoned kingdoms, that has been overrun by Dungeonization. The discarded city might keep intact but eventually, either gradually or all at once, will be incorporated into the dungeon. However, even then, features of the original town remain. In other words, the castle and houses might look the same, but their internal structure have become horribly complicated because of the Dungeonization. When secret doors and traps are found in an otherwise normal-looking house, it might seem stranger by far than other dungeons[1].

The landscape of the Endless Dungeons is a kaledoscope, and mazes of every kind and form that is remotely imaginable can and do appear. By the way, the dungeons of the Heaven and Deeps floor also have very strange characteristics, but those will be discussed later.

It is important to pay attention to changes in the dungeons. A dungeon can be made, changed, or destroyed by the act of men, nature, and of course through Dungeonization. Inhabitants of a dungeon (which aren't always human) often do reconstruction. A wooden door replaced with a more sturdy one made of iron or stone, ladders placed to access levels where there are no stairs, a Dynamite Empire dwarf drilling teams, or a Metro Khanate advance railway-laying team--these can be seen everywhere in a continuing, untiring, day-and-night effort to change the dungeon and improve day-to-day life.
[SIDEBAR] The Tongue

One of the strangest monsters in the Endless Dungeons is the "tongue". The tongue is sticky, fleshy, soft and wet, and zooms through the winding corridors at a fast rate. A person rolled up in its folds is taken away and never seen again.

Originally thought to be something really long. More specifically it is assumed to be the tongue of an really, really huge anteater. Somewhere in the Endless Dungeons, an anteater the size of a dragon has his tongue inserted into the dungeon, preying on monsters and people as food.
[1]・・・・・・Because of the remaining vestiges of daily life, these dungeons are extremely melancholic. When I am walking down the winding aisle of an abandoned castle and I am seeing the star light shining brilliantly through a window, I can not help but think about that surge of Dungeonization swallowing it all and be reminded of a sense of impermanence that whatever we build can not last.↩
Posted by dm_punks Posted at 4:09 PM